We are pleased to publish this heartfelt article from Andy Strutt, our bestselling author, whose début novel, ‘The Afflicted,’ has captured the imaginations of readers worldwide. Andy writes candidly about the story behind his new book. Please enjoy! 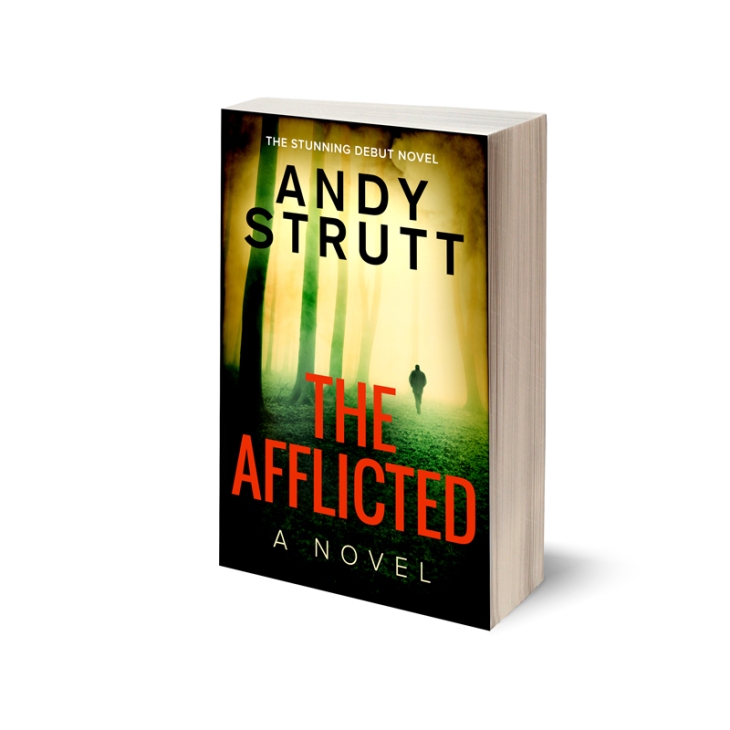 My first love in life as a young boy was reading. By the time I was seven years old, I had read all the books in my primary school library. My favourite genres at the time were fantasy and science fiction; I loved reading about magical worlds where anything was possible. One of my teachers at the time encouraged me as a result of an assignment she had given the class. Everyone turned in a couple of sides of A4 but that wasn’t good enough for me, no, I just kept on writing until I ended up with almost ten times that amount. I still remember the story; it involved a scientist who created a potion that made everything grow bigger to help improve crops. Obviously, someone stole the potion and before I knew what was happening; there were giant insects and other scary creatures involved.

From that point on, my life changed and writing took a strong hold in my life. We were not a wealthy family so I used whatever I could, exercise books, A4 pads or loose sheets, it did not matter to me. I used to insist that everyone in the family had to read my stories, I was sure my aunts and uncles used to cringe when I turned up.

As I grew older, I found that I love sciences and gradually I wrote less and less, concentrating instead on academia until I gave up altogether. Fast forward through school then university and I found myself in the fast-paced environment of the industry. Add a family to that mix and my dream to one day write a novel was a distant memory.

Then in my mid-thirties, I became ill and found that I could no longer keep up at work and three and a half years later, my office included my name on the dreaded redundancy list. I was unhappy at first but one day as I was helping my children with their homework, their teachers had asked them to write a story on a topic, a place, a character and an object. No matter how hard I tried, they insisted that it was impossible, so I challenged them if I could do it then so could they! There and then, I rekindled my love for writing.

Twenty years as a scientist with Yorkshire as a first language made it very difficult at first but the spell checker became my best friend and I did it. ‘Vampires vs Dinosaurs’ was by no means a piece of classic literature but it served to remind me once again how much I loved writing. Due to my condition, I had plenty of time on my hands so I switched on the computer and began. I knew my English needed work, so I also began reading every book I could to improve my technique and grammar.

One day, I spotted an eBook novel-writing competition in a magazine offering a publishing contract on a new website. The deadline was a little under a month away and after talking to my wife; I decided to give it a go.

I knew it would have to be a subject that I knew well and felt strongly about so I chose the sciences. Over the years, I had kept up with the innovations, partly to remain current but mostly because I enjoyed it. As a scientist, I have always admired those innovators that have pushed the barriers of knowledge forward but it worries me sometimes, that as a species, we don’t always consider the consequences of our actions. Often, we are lucky like Louis Pasteur when he discovered Penicillin but other times, citing the example of nuclear energy or introducing Cane Toads to Australia, it has been disastrous. As we master the genome and things like designer babies, and GM food became a reality, humankind has to think carefully before they move forward.

From this one premise, the idea for ‘The Nosferatu Effect’ was born. I worked hard every day, sometimes from the break of dawn until the early hours of the morning. Finally, with only an hour to spare before the deadline, I sent my novel off for judging and that was the last I heard of it.

I continued writing and began working on a couple of projects, promising myself that I would wait three months before sending ‘The Nosferatu Effect’ to other publishers and agents. My three months deadline was almost over when I received an email notifying me that my novel had reached the top ten. I was ecstatic at first but after boasting to all my friends, I began to wonder if I was doing the right thing. I knew an eBook would be a good stepping-stone but I am a traditional reader and preferred books on paper. Reluctantly, I withdrew the novel and decided to start sending it elsewhere.

After several months of constantly writing and improving my technique, I realised the painful truth that ‘The Nosferatu Effect’ needed a lot of work so I rewrote it before sending it out. Months went by and then years, with rejection letter after rejection letter darkening my door until finally, Arrow Gate Publishing decided to give me a chance. The team there worked hard to help me polish the book and guide me to improve my writing considerably. They walked me through every step of the publishing process including helping me to give the book a better title, ‘The Afflicted’. Finally, on December 18, 2013, I fulfilled my dream and the paperback version of my début novel went on sale. So far, feedback has been great and I am happy to be doing what I love.

I have begun work on another project and I hope my new book, would end up in bookstores soon. In the meantime, I enjoyed writing ‘The Afflicted,’ and I hope readers would love reading it!